Home » About Us » The Team » Bobby Milton 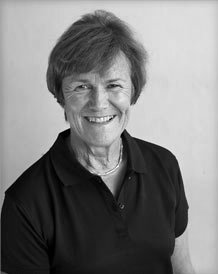 Bobby trained and worked at Guy’s Hospital London and from here went on to hold several top Physiotherapy positions in central London including the Royal Academy of Dancing, Nat West Bank and London Weekend Television.

Bobby has a special interest in general physiotherapy for the elderly and orthopaedic post operative rehabilitation. She has many sporting interests, in particular golf.

View our latest news, blogs, tweets etc and connect with us.
Complete our patient survey here.

Register your details to receive all our latest news and information about events.

We are recognised by:

"I had several physio sessions after my hip replacement operation. Her expert advice and evident in-depth knowledge made all the difference to my recovery."

See our recovery stories
We use cookies on our website to give you the most relevant experience by remembering your preferences and repeat visits. By clicking “Accept All”, you consent to the use of ALL the cookies. However, you may visit "Cookie Settings" to provide a controlled consent. Read More.
Reject All Cookie SettingsAccept All
Manage consent