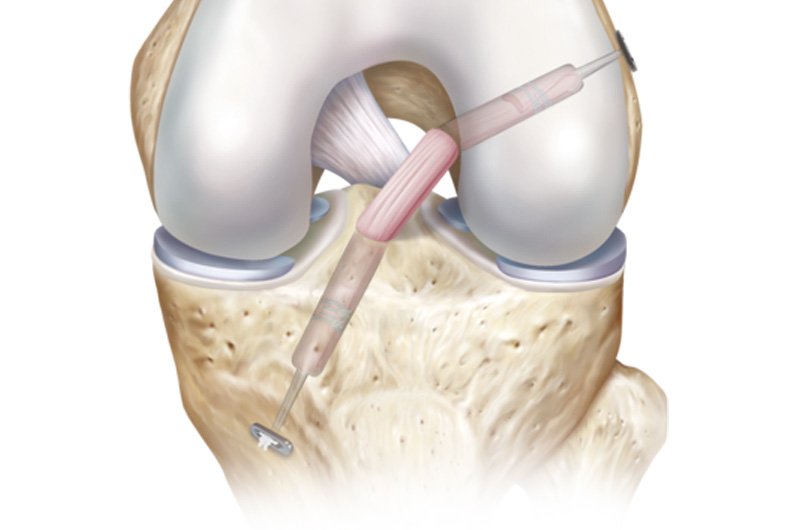 LARS is an acronym for Ligament Augmentation Reinforcement System.

Synthetic materials were first used in ACL reconstruction in the 1980’s to improve the strength and stability of the graft immediately post operatively, reduce donor site morbidity and eliminate the potential for disease transmission. The first synthetic ligaments were associated with high rates of failure and reactive synovitis. Over the last two decades with advancing technology, new types of synthetic ligaments have been developed. The latest LARS is composed of polyethylene terephthalate fibres, an industrial-strength polyester fibre. It can only be used in patients that have a well vascularised ACL stump, ideally in acute settings. The theory is that the LARS pulls the two ends of the ACL together and allow for fibroblastic in-growth. The synthetic ligament is used as a ‘internal splint’ that allows the torn ACL to heal around it.

The ligament is highly cleaned to remove potential machining residues and oils to further encourage soft tissue in-growth and reduce the risk of reactive synovitis. The scaffold of the ligament consists of multiple parallel fibres twisted at 90-degree angles. This prevents the fibre breakdown and is thought to facilitate even tensioning of the graft fibres during knee movement. The scaffold provides a meshwork for the injured ligament to heal and repair.

Traditional ACL reconstruction techniques require debriding of the torn ACL fibres and synovial lining that normally envelops the ligament, in order to visualise the position for the graft. The LARS surgical technique uses an intra operative image intensifier X-ray to position the tunnels for the LARS through the ACL stump and is therefore able to leave the synovial lining and the torn ACL fibres insitu.

The proposed advantage of this technique is reduced trauma to the soft tissues of the knee and less surgical time. The ACL stump is anchored to the meshwork of the LARS to support it in an optimum position while healing. Overall, the LARS surgical technique aims to maximise in-growth of the original ACL tissue, thus preserving some vascular and proprioceptive nerve supply.

COMPLICATION RATES
In a 5 year short term follow up, there does not seem to be a major difference in failure rates. Gao et al (2010) showed a complication rate of approximately 6% at 5 years. Roe et al. (2005) suggest that there is no significant difference between patellar and hamstring graft failure rates at 7 year follow-up – approx. 20% for both. Interestingly, the study found those with patellar tendon grafts were more likely to rupture their contralateral ACL (18%) than ipsilateral (4%), whilst for hamstring grafts there was approximately even risk (10%) between legs.

We use cookies on our website to give you the most relevant experience by remembering your preferences and repeat visits. By clicking “Accept All”, you consent to the use of ALL the cookies. However, you may visit "Cookie Settings" to provide a controlled consent. Read More.
Reject All Cookie SettingsAccept All
Manage consent